Update on State of Json-parsing Performance

It has been good year and a half since I blogged about Json performance ("More on JSON performance in Java (or lack thereof)" ).
So it is about time to revisit the question and see what is the state of the art with Java Json processing today.

This time I will be using a bit more full-featured performance benchmark framework: (codename "StaxBind"), which is based on Japex, and allows for easy comparison of different data format / library combination for different tasks. Initially aimed at comparing data binding performance for xml processing (hence the name), it is growing for a more general purpose data format processing performance testing framework.
For now the module is available from Woodstox repository, and contains a few test cases including one used here.

Since benchmarks are run using Japex the results should be more informative as well as reproduceable; plus, we get some pretty graphs to look at.

The specific test used from StaxBind is "json-count", test designed to allow testing a wide selection of available Java Json parsers. Test code essentially traverses through given Json documents, counting instances of field names; results are verified before each test to ensure that all parsers (or rather, test drivers for parsers) see the same data.
This traversal operation is not an overly meaningful in itself, but it is easy to implement for most parsers (see below for exceptions), and should be reasonably fair and representative regarding expected processing performance. The other more obvious choice would be a data binding test -- I hope to cover that later on -- but that will mean writing much more test code for packages that do not support automatic data binding.

Document sizes vary from 3 to 15 kB; fairly small, but enough to show the trend about parsing performance. This is not a great set of documents to use, but since there is generally accepted set of Json test documents available (or if there is, please let me know!), it will have to do.

I decided to choose parsers to test from json.org's java parser implementation list. I think that is the most likely starting point for developers; and it is reasonably complete list as well.

Not all listed libraries from the list qualify. Specifically:

Given this, here are the contestants:

Of these, all implement a tree-model; some also implement data binding (json-tools and Jackson at least), but only Jackson appears to implement pure streaming interface. For this reason, there are 2 tests for Jackson: one using Tree model, the other streaming API.

After letting Japex churn through the test for almost an hour, we get the actual results. Full result data and graphs can be found here. (also: here are result from another test run (this one with a more modern dual-core system). Both runs are on a Linux desktop machine, using a recent JVM (1.6.0 update 10 or 12)

But here is the main graph (from the first test run) that summarizes results: 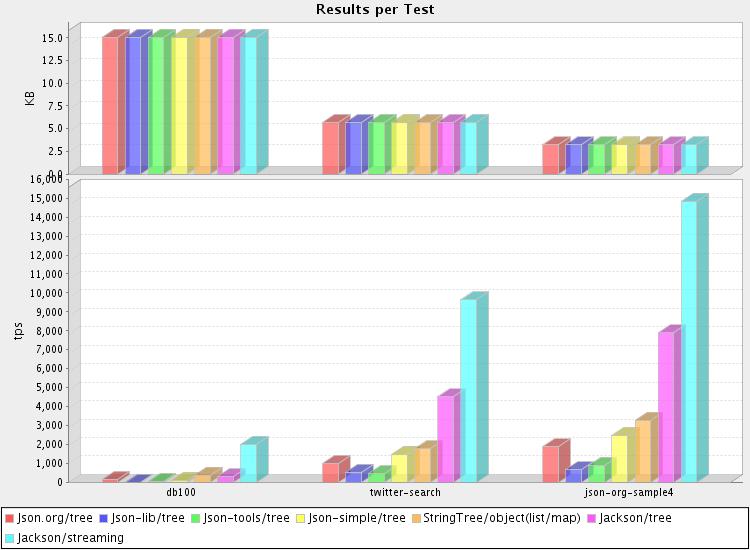 It looks like Jackson is still rather more efficient at parsing than the rest: not only is the core streaming parser very fast, even the tree-based alternative does quite well. In fact, graph readability suffers a little bit from Jackson's dominance.

As for the rest, StringTree parser performs a bit better than the others. But the biggest surprise may be the fact the reference implementation is faster than most alternatives; despite the claims made for these alternatives (I have yet to find a library that doesn't claim to be light-weight and fast :) ). In a way that's good -- at least most developers are not using the slowest available parsers.