json+gzip nicely packed, but has it Got Speed?

One commonly occuring them on discussions on merits (or lack thereof) is the question "but does the size matter". That is: while textual formats are verbose, they can be efficiently compressed using common every day algorithms like Deflate (compression algorithm that gzip uses). From information theory standpoint, equivalent information should compress to same size -- if one had optimal (from information theory POV) compressor -- regardless of how big the uncompressed message is. And this is quite apparent if you actual test it out in practice: even if message sizes between, say, xml, json and binary xml (such as Fast Infoset) vary a lot, gzipping each gives rougly same compressed file size.

But what is less often measured is how much actual overhead does compression incur; especially relative to other encoding/decoding and parsing/serializing overhead. Given all advances in parsing techniques and parser implementations, this can be significant overhead: compression is much more heavy-weight process than regular streaming parsing; and even decompression has its costs, especially for non-byte-aligned formats.

So: I decided to check "cost of gzipping" with Jackson-based json processing. Using the same test suite as my earlier JSON performance benchmarks, I got following results. 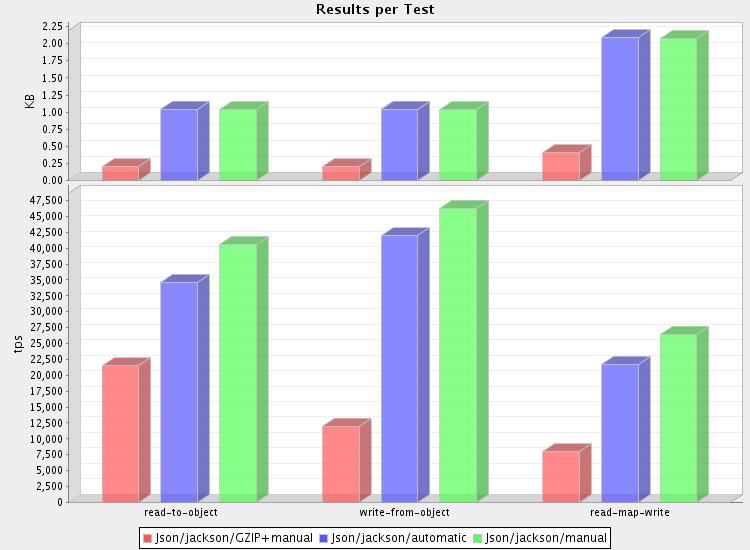 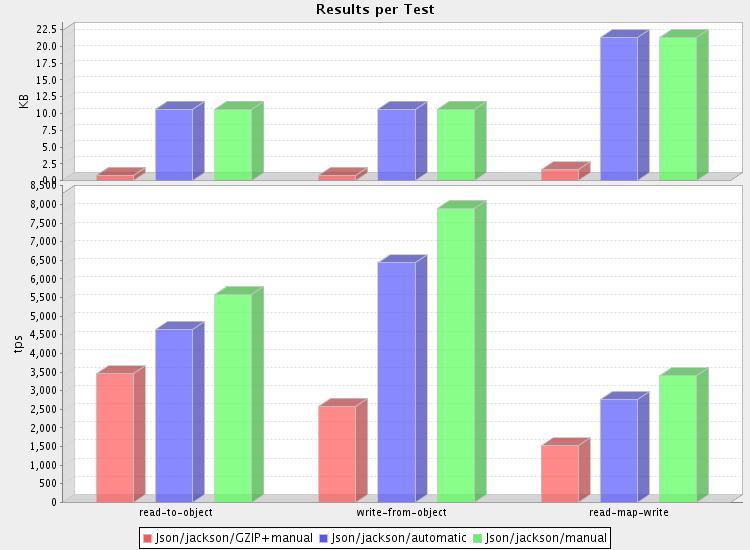 So what is the verdict?

1. Yes, redundancies are compressed away by gzip

And even for less optimal cases, just gzipping generally reduces message sizes by at least 50%; similar to compression ratios for normal text files. This is usually slightly better than what binary formats achieves; oftentimes even including binary formats that omit some of non-redundant data (like Google Protococol Buffers which, for example, requires schema to contain field names and does not include this metadata in message itself).

But it all comes at high cost: overhead is highest for smallest messages, due to significant fixed initialization overhead cost (buffer allocations, construction of huffman tables etc). But even for larger files, reading takes about three times as long as without compression, if we ignore possible reading speed improvements due to reduced size. And the real killer is writing side: compression is the bottleneck, and you'll be lucky if it takes less than five times as long as writing regular uncompressed data.

Depends: how much is your bandwidth (or storage space) worth, relative to CPU cycles your programe spends?
For optimal speed, trade-off does not seem worth it, but for distributed systems costs may be more in networking/storage side, and if so compression may still pay off. Especially so for large-scale distributed data crunching, like doing big Map/Reduce (Hadoop) runs.

Or how about this: for "small" message (1.4k uncompressed), you can STILL read 22,000, write 12,000, or read+write 8,000 messages PER SECOND (per CPU). That is, what, about 7900 messages more processed per second than what your database can deal with, in all likelihood. Without compression, you could process perhaps 14,000 more messages for which no work could be done due to contention at DB server, or some other external service... speed only matters if the road is clear.

Yes, it may well make sense even if it costs quite a bit. :-)

If I have time, I would like to verify how XML+GZIP combination fares: I would expect same ratios to apply to xml as well. The only difference should be that due to somewhat higher basic overhead, relative additional overhead should be just slightly lower. But only slightly.